Thank you for your patience while we retrieve your images.

Visitors 65
15 photos
I really miss the shuttle launches. When I heard the shuttle program was ending, I decided to see as many launches as I could. All my vacation time was spent in Florida. There is nothing like seeing a launch in person. The view is so much different then what you see on television. I think it is because you see everything, not a narrow view. That is incredible, but the sound can sometimes feel like you are front row in front of the speaker at a concert. The feel of the sound is the first thing I will remember. The view of the launch and the sound of the crowd is next. It all happens so quickly, but as you set in traffic for an hour or two after the launch, it embeds in your memory. What a great time!
I went to Kennedy Space Center for the rollover of Atlantis to its new home. It was a real treat to be able to be up close to image the shuttle. I watched the last lift off of Atlantis and now, I was almost right beside it. It was one of those bitter sweet moments. It was the end in one way and the beginning in another way. 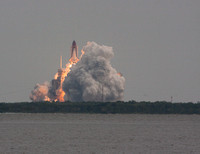 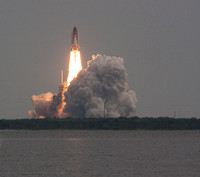 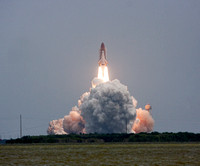